If a tree falls in a forest and there are no clients, does it make a sound?

This is an intermediate article. If you want to learn Flask, you might want to start with Hello world.

When installing stacks with many components, method is important. It's practically impossible to always type a billion commands perfecdctly without any typos. So

First, let's test that we're not running Apache web server yet. The port is closed (not open, not filtered), so we get a "connection refused" or similar answer immediately.

Or with Firefox http://localhost/ "Unable to connect". 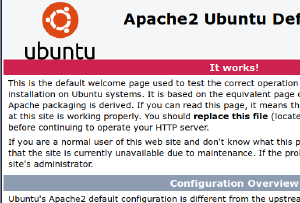 We don't have to care about the content ("It works!"), but the fact that is a web page served by Apache shows that it's working.

Let's overwrite the test page with some placeholder content. You can use any neutral string.

You can use 'sudoedit /var/www/html/index.html' if that is more familiar to you.

We can see that the test page was replaced. It looks the same with Firefox on http://localhost.

Create a New User for Our App

For security, we create a separate user for our app. The easiest user management commands start with a verb: adduser, deluser.

Always use a good password. Never use a bad password. Always practice using good passwords, because why on earth would someone practice doing things horribly wrong? If you can't come up with anything, you can randomize one

If you ever forget the password, you can easily overwrite the old one with

As we won't need to log in as this user, let's lock it. This prevents login with a password, and we have not enabled ssh public keys for this user.

Let's add ourselves to users own group. Adduser has another syntax to add user to a group. Yes, one command, quite different purposes.

Log out and back in to get activate this group.

Later, this will allow us to edit the files in this technical user's home directory.

Create a new name based virtual host. We write the conf file in sites-available/, then enable it by creating a symlink in sites-enabled/.

You might recognize the parts that are similar to any name based virtual host serving static content. We have VirtualHost, ServerName and Directory stanza.

New lines are highlighted. Most of this is boilerplate, same in many projects. The things that need changing are

The meaning of each instruction is explained in Flask mod_wsgi deployment guide and mod_wsgi documentation.

Let's enable our new site to get some fresh errors. This simply modifies the symlinks in sites-enabled/.

Settings are only taken to use after we kick the daemon. Before that, we can conveniently check that we did not make any typing misteaks.

Oh, maybe we should actually install the WSGI module before we can use it.

Apache2ctl configtest should say "Syntax OK". Any complaints about servername blah blah localhost are harmless. If there are actual errors, this usually tells the line number, too.

When restarting Apache, remember sudo. Often, systemd does something and tells you it did something if you forget sudo. It does not tell you that you forgot sudo.

So, as a reward for our efforts

We just broke it? Maybe we should actually install our program. Note that the user (with curl or Firefox) just sees "403 Forbidden", but the actual filename is in the logs, just for us.

Let's create the folder it's complainging about. Verify that we're in the wsgi user's group

Let's create a the folder

fixing the permissions, because normally we don't go around sudoing in user's home dirs

So now we fixed the directory problem, and we should create the tero.wsgi file.

WSGI file is the entry point that starts our Python application. The most imporant things are adding the public_wsgi directory to Python path (sys.path.insert) and importing application.

I find it very annoying when my new, fresh Python 3 code is interpretted as Python 2, so I added an assertion that gives me a clean error if that happens.

Wow, Apache would actually like to see my hello.py. Let's not keep her waiting. We can use our "Hello Flask" app, but we must remember to remove the insecure development server "app.run" line.

Nice. Let's try with Firefox http://localhost. Note that in my screenshot there is a port number 8081, while your system likely shows just localhost.

Do you see a message from Flask? Well done, you've just set your Flask up for production.

Load testing your own computer, in your own network, on your own hardware, is useful. Doing it to computers or networks you don't own could be denial of service attack - illegal. So be careful if you decide to try load testing tools. Here, localhost is a safe address.

So, with my single core machine with 1 GB RAM, Apache could serve over 2000 pages per second. The slowest page took less than 0.1 seconds to generate. Quite fast, but it's a tiny page.

When you start developing your app, you can compare results with templates and database access.