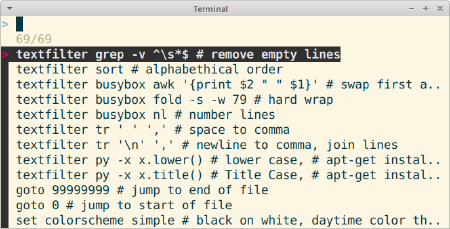 I published three new plugins for Micro editor this week

You can install them all today.

These are plugins for Micro editor, a TUI (text user interface) programmers editor.

Palettero shows a command palette. Press Ctrl-Space or Ctrl-P to show the palette, type to fuzzy search, enter to select. Enter to run, or edit the command. Supports all Micro builtin commands and help files. Has a toolbox of addional textfilters. Supports

Jump - Jump to any function, class or heading with F4. Go, Markdown, Python, C... (+40 others). This one I published already in 2021, and it's part of the official plugin channel. You can install it with 'micro --plugin install jump'.

Micro editor is a TUI (text user interface) programmer's editor. Micro is quite intuitive even if you're from GUI (graphical user interface) world. Ctrl-S saves, Ctrl-Q quits. Shift-Up and shift-down select. You can indent and deindent selection with tab and shift tab. You can install it with 'sudo apt-get update; sudo apt-get -y install micro'. It's also available for lesser operating systems, such as Windows and Mac.

You can install them all right now. These instructions are for Debian, but the plugins probably work on any Linux. Prerequisites and recommended packages

Press F1 and Python cheatsheet appears in a new tab. Press Ctrl-Q to close it.

Press Ctrl-P (or Ctrl-Space) to open command palette. Type to fuzzy search "search plugin". Select "plugin search jump..." and press enter twice to run it. A bottom split window opens and shows some details of the jump plugin. Press Ctrl-Q to close it.

For any of the "textfilter" commands, select some text with Shift-Up, then run a textfilter to modify it.

Write some Python code to your file:

Run it with F5. You'll see the output "Hello, Tero!". Press Enter to close the output.

Run plugin also supports Makefile. You can also compile your project with 'make' when you're editing a file in one of the subdirectories of your project.

Try Jump to Move Between Functions

Press F4. Type "foo" and press enter to jump to function "foo()". Cursor is now placed on the line where the function is defined, "def foo()".

Well done, you have installed the plugins!

This article has been updated after publishing.

Micro editor logo is the property of its owner.