When I press Alt-D, the function signature is shown on the bottom status bar:

It was very easy to get Go features working. Python required some digging, but here is a ready made solution.

These commands have been tested on Debian 11-Bullseye, but they'll likely also work on other Debian based distros like Kali, Raspbian or Ubuntu.

AndCake's plugin is still beta. Thus, installing LSP support to micro is likely to get simpler in the future.

Even though I have created other ways of using LSP with micro in the past, the plugin used here is written by AndCake, not me.

Micro uses familiar commands, so Ctrl-S to save and Ctrl-Q to quit.

This also created the config file we can edit later

If you're using 'tmux', the terminal multiplexer, use the correct TERM setting to allow selecting with Shift-Arrows.

Enable it in settings. When micro opens its own settings, it warns that file has changed on disk, reload? Say "y" for yes.

Let's try it out.

Move cursor over Println and press Alt-K. Function signature is displayed at the bottom of the screen. 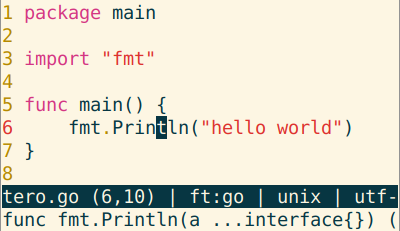 Go plugin has worked for a long time. It does not use LSP.

It allows you to quickly format your code.

Well done, now you have nice Go support in Micro

In the prompt, "(env)" shows that we're now using the virtual environment. Let's install what we need. Also, let's not install anything annoying.

Add contents to requirements.txt. I've hand picked what's installed with python-lsp-server, so that it does not annoyingly demand you to add two empty lines between functions, but does complain about real problems. Mypy can optionally warn you about incorrect types, if you mark the types in your functions.

After a moment, pip has installed your packages. Let's try it out!

Write some mistaken Python. Go ahead, you've got my permission.

Save with Ctrl-S. Now a warning ">>" appears on the gutter. Move the cursor over the line with warning, 'return a'. Now the full warning is shown at the bottom, on the status line: "undefined name 'a'".

Move cursor over sub() and press Alt-K show function signature. The parameters for the function are shown in status bar at the bottom of the screen.

Note that micro does not pop helpful advice on your face while you try to write. It helps, but only when you ask with Alt-D or Alt-K.

On the same program, keep cursor over sub() and press Alt-D.

The file containing the function defition opens. Press left or right, so that view jumps to cursor position.

Just like we discussed before, you can use alt-. and alt-, to move between micro tabs; and Ctrl-Q to close the tab.

Using PyLsP with the P in the End

Pylsp project we use here is the current one. Instructions in AndCake/micro-plugin-lsp imply the use of palantir/python-language-server pyls (no "p" at the end). However, as of 2022-04-03 w13 Sun, Palantir project has last been updated at the end of 2020, over a year ago. A community maintained fork python-lsp/python-lsp-server has been updated four days ago. The discussion on Palantir version's bug list also gives some indication that development has moved to python-lsp/python-lsp-server we use here.

Micro now suppors LSP, the language server protocol. The support is trough an experimental plugin, but it works.

In Python and Go, you can now

python-lsp / python-lsp-server "Fork of the python-language-server project, maintained by the Spyder IDE team and the community"

mypy - Optional Static Typing for Python This has the examples how to mark the types.

Now that you can see how individual functions work, would you like to have the full docs offline? Checking HTML and Javascript on Mozilla Developer Network (MDN), reading Python requests quickstart or Django tutorials - all from the comfort of your terminal? Check out ks - the KanaSirja offline dictionary.

This article has been updated after publishing